In a blink of an eye, we are almost done with the 1st quarter of 2016! Is it just me, or does anyone here agree that time seem to be passing a tad too quickly? I remember we were barely counting down to 2016, and after a few work trips here and there, March is almost coming to an end!

And in less than half a year, it will be our Nation's birthday!
National Day is one of my favourite public holidays cos it's really meaningful, at least for me. :)
With the SG50 celebrations last year and all the publicity given, I'm sure it is not hard to guess how old Singapore will be right?

On her 51st birthday,
the theme for NDP is "Building Our Singapore of Tomorrow."

As an entrepreneur myself, I have learnt that building a company is not as easy as it seems or looks. It's not all glitz and glamour like what you see on our social media platforms. It's just that we choose to show the nicer side. But exactly what goes on behind, customers do not really know.

Likewise, building a nation is no simple feat and having travelled to several countries in 2015, I MUST emphasise Singaporeans are really one bunch of lucky people! We are pampered in so many ways by the government, but sadly, many of us are oblivious to what we have. I can go on about all the positivity we are blessed with but taken for granted, but let's save it for another day. For now, let's focus on NDP 16!

As I have mentioned, the theme is "Building Our Singapore of Tomorrow."
"Building" refers to a continuous effort by everyone, to work towards our future together which can be accomplished with our hard work.
"Our Singapore" invokes a sense of belonging to us Singaporeans, a reminder to stay rooted to our country and future.
"Tomorrow" is something to look forward to, hence it connotes a new tomorrow,
a new chapter post SG50.
At this point, can I just hashtag #meaningful?

2016 will be the 1st celebration of the next 50 years towards SG100. The parade will be held at a familiar ground - the iconic National Stadium after a 10 years hiatus. In line with building on the efforts of our pioneers and recognising the need to move into the future, this year's NDP will present old favourites and technologies that will be part of our future.

As such, old traditions such as the Parade and Ceremony, a precision drill display and the Republic of Singapore Air Force's State Flag Flypast will stay. Adding on our future, we can expect new displays such as 3D projection displays, unmanned technologies and even indoor fireworks for the 1st time in our NDPs! Sounds exciting enough!

Every year, we have a NDP logo and 2016 is extra meaningful. :)
In line with the theme to build a Singapore of tomorrow together, for the 1st time, the NDP EXCO has opened up a competition beyond schools and to all Singaporeans to come up with a logo. Not only that, the public could also vote for their favourite logo, which ultimately became the choice for NDP 16. This move aims to encourage interaction and participation in the NDP journey, which well, I think is a good move!

And this above is our logo for 2016 if you haven't seen it around yet!
This logo is designed by a 19 year old Singapore Polytechnic design student, Ms Chelsea Lim.

Just looking at this somewhat channels some sort of love, doesn't it?
If you realised, there are 4 shades of red in the heart itself.
This represents the diversity Singapore has, the various religions and races we have in one Singapore.
The heart shape celebrates love, our love for Singapore and of cos, our happiness in this place we call home.

The handwritten font represents our future, one that we have to build together.
If you realised, the 6 in 2016 goes taller and longer than the rest.
This demonstrates that Singapore is forward-looking and always striving to reach for greater heights.
The tip of "6" is a brushstroke bursting into a firework of 5 stars, depicting the nation's ideals as represented in our national flag.

I have not been detailed enough to bother about such details in the past, but I'm extremely honoured to be able to learn about these in depth this year. Never too late, right?

I hope you guys are looking forward to NDP 16 as much as I do! :)
Will share more in time to come!
For now, let's always be thankful to everyone who has contributed to the Singapore today we affectionately call home.
Posted by briannawonggg at 13:38 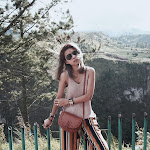 Thanks for popping by! I'm Brianna, also known as Bree. I run The Closet Lover, a Singapore based online apparels store with the world's most awesome sister! For advertorials or anything under the sky, drop me an email at briannawonggg@gmail.com :)

Read My Micro-Blog on Dayre!